Posted on February 20, 2016 by Built Environment and Health

It has been suggested that GPS monitoring data can be used to estimate distances traveled and speeds of travel during active and non-active travel journeys and, that when combined with accelerometer monitoring, GPS data can be used to identify travel mode.  We tested whether the distances between successively captured GPS way points can be used to measure distances walked in varying environments in NYC. Students walked a series of structured routes in areas with high and low building bulk density and on streets with high and low tree canopy cover while wearing GPS monitors.  The sums of distances between successive GPS way points over estimated travel distances and over estimates were larger in areas with high building bulk density and on streets with high tree canopy cover. Algorithms using distances between successive GPS points to infer speed or travel mode may misclassify trips differentially across built environment contexts.  The abstract can be found HERE and the full paper will be available in the American Journal of Public Health.

Below is an image of the GPS data collected during walks along streets in low and high building bulk density. 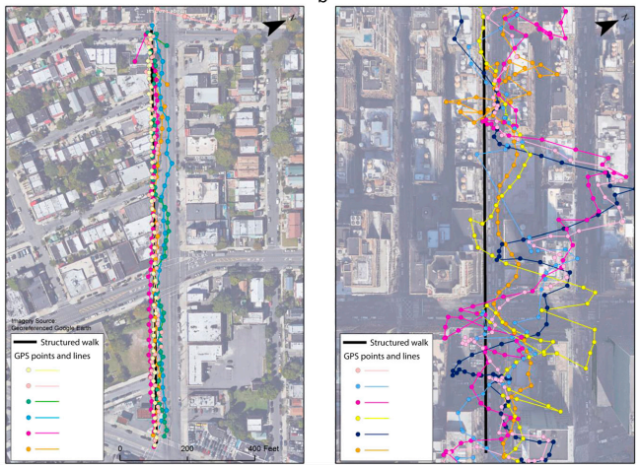 GPS data collected during walks along streets in areas with low (left side) and high (right side) building bulk density. Image by Dan Sheehan.

This entry was posted in Active Transport, GPS, Physical Activity. Bookmark the permalink.