Posted on August 28, 2020 by Built Environment and Health

In new work published in the Annals of the American Thoracic Society we analyzed the links between where children are physically active and their exposure to air pollution and lung function.  Physical activity is associated with increased ventilation because of rapid and deeper breathing. Thus, being active while being exposed to high air pollution could lead to increased inhalation of pollutant particles and gases. In urban communities features of the built environment, including locations where children engaging in physical activity, could put individuals at risk for harmful inhaled exposures leading to lung function decrements. Thus, we conducted a study to investigate locations throughout New York City where children engaged in moderate-vigorous activity. Our hypothesis was that being physically active outdoors, particularly near high sources of traffic pollution, would be associated with increased air pollution exposure and decreased lung function.

Our study was conducted as part of a longitudinal birth cohort study in affiliation with the Columbia Center for Children’s Environmental Health that recruited pregnant, non-smoking mothers who lived in Northern Manhattan and the Bronx. At the time of enrollment in this secondary study, children were 9-14 years of age and still lived in NYC.  The 151 children enrolled in the study wore global positioning system (GPS) devices in a vest to identify their locations and accelerometers on their wrists that measured physical activity level. Devices were worn for 24-hours with repeated measures after 5 days. We paired the GPS and accelerometer data and mapped the data using ArcGIS to determine where children engaged in moderate-vigorous activity. We also used data from the New York City Community Air Survey (NYCCAS) to determine annual average air pollution concentrations in the locations where children were physically active. To account for daily fluctuations in pollution we adjusted our analysis for daily NYC pollution measured at a single site as well as daily temperature and humidity. Lastly, we measured lung function at the end of each 24-hour physical activity monitoring period.

Because physical activity leads to increased ventilation, the ability to identify specific locations of activity especially near sources of high pollution can improve risk assessment for lung function impairment. Our findings of a positive association between outdoor active time in warmer weather months and both elevated NO2 exposure and reduced lung function demonstrate a need to inform individuals in urban communities about location specific exposure risks. Our findings also support the need for continued attention towards improving air quality especially in urban communities.

Posted on April 13, 2020 by Built Environment and Health

Prior to the COVID-19 pandemic, 11% of households and nearly 16% of families with children were food insecure. With schools closed and families out of work, food insecurity rates are expected to skyrocket in the coming months. During the crisis, food store shelves have frequently been empty due to bulk purchasing and an increase in at-home meal consumption. In an effort to ensure food is available for SNAP shoppers when they receive their monthly benefits, social media campaigns have encouraged non-SNAP shoppers to avoid food shopping during SNAP distribution dates. This is a particular concern in counties with large SNAP populations and in states with only a few SNAP distribution days per month (e.g., Nevada, Virginia, New Jersey). To inform these efforts, BEH’s Eliza Kinsey has developed a web mapping tool of SNAP distribution schedules and participation rates by county. This tool is intended to be used, both by household food shoppers and by policy-makers in designing strategic efforts to combat the food insecurity and nutrition challenges brought on by the COVID-19 crisis.

Posted on April 8, 2020 by Built Environment and Health

Our online mapping tool has been updated with new data showing counties that are at high risk of experiencing patient volumes that exceed their hospital capacity over the next 6 weeks.  The maps show at risk counties for three different levels of social distancing and two levels of intensity of surge responses by hospitals.  The estimates use Jeffrey Shaman and colleague’s models of disease spread and the estimates posted previously of how many critical care hospital beds can be made available under various assumptions of hospital responses to patient surges. A full description of the methods can be found |here|

As in prior posts, the mapping site is a work in progress and will be updated frequently.

County Level Estimates of When Hospital Capacity will be Overwhelmed

Posted on March 31, 2020 by Built Environment and Health

We have been working as part of a multi-institution team to make county level estimates for the U.S. of the time until health systems are overwhelmed with patients.  The analyses use a 28 day look forward window from 3/24/2020 and identify numerous counties where the health care system is expected to be overwhelmed; 28-day look forward analyses will be re-done weekly. Projections of time to health care systems being overwhelmed have been made for various levels of social distancing and various levels of intensity of hospital response to patient surges.  A paper detailing all of the estimates will be uploaded to pre-press sites soon.

As in prior posts, the mapping site is a work in progress and will be updated frequently.

Posted on March 27, 2020 by Built Environment and Health

In collaboration with Charles Branas in the Department of Epidemiology and colleagues from Patient Insight, the Mount Sinai Health System and MIT, we have been working to estimate the number of hospital critical care beds, including ICU beds and other hospital beds used for critical care purposes, that could be made available by hospitals in response to patient surges.  Three scenarios of intensity of hospital response were created, taking into account existing ICU bed availability, currently occupied ICU beds that can be made available, other beds such as post-anesthesia care unit bed, operating room beds, and step-down beds that could be converted to critical care beds for COVID-19 patients and the possibility of having two patients use one ventilator in ICU. All civilian acute medical-surgical tertiary care hospitals and long-term acute care hospitals hospitals for which data were available in the US are included.

The data are mapped on our online interactive COVID-19 mapping tool.  The documentation of the methods is here.

Posted on March 24, 2020 by Built Environment and Health

Our geographer extraordinaire, James Quinn, built a new version of our interactive mapping tool for severe COVID-19.  The map depicts populations at high risk of severe COVID-19 due to older age or underlying health conditions, the availability of ICU beds and the ratios of  high risk populations to ICU beds.  The interactive mapping tool is here.  This is an ongoing project and we will keep updating the maps with new data and features as the pandemic continues.

ICU bed counts from HRSA (https://data.hrsa.gov/data/download). As roughly 66% of these beds are currently occupied, these numbers overstate the number of beds available for COVID-19 patients.

Posted on March 17, 2020 by Built Environment and Health

We have continued our partnership with PolicyMap.Com and they created us an interactive mapping widget that shows the data on populations at risk of severe COVID-19.  The at risk populations we mapped are: the number of people 65 years and older; number of people 75 years and older; the numbers of people with underlying chronic conditions linked to severe COVID-19 disease; and the number of hospital beds (note that at any given time in the U.S. about 66% of beds are occupied by patients).

Posted on March 17, 2020 by Built Environment and Health

We have continued to work with Policymap.com‘s excellent data portal tool to map populations at risk of severe COVID-19.  Our prior post is here.  The map below shows Counties in purple with high numbers of adults 65 years or older and low availability of hospital beds.  High numbers of adults 65 years or older was defined as more the U.S. median across counties (greater than 4,698 people) and low availability was defined as less than the median number of hospital beds (<49 beds).  Population counts are from the Census Bureau for 2014-2018 and counts of hospital beds are from the Health Resources and Services Administration (HRSA) for 2016.

Counties in purple have large populations of older adults and low numbers of hospital beds.

At Risk Populations for Severe COVID-19

Posted on March 16, 2020 by Built Environment and Health

Like the vast majority of the world, we have been obsessing over the COVID-19 pandemic.  Given that certain populations are at risk for severe COVID-19 disease we have been wondering where the at risk populations are in the U.S.  To generate some quick maps we used Policymap.com‘s excellent data portal and mapping tool. By county, we mapped the number of people 65 years and older, 75 years and older and the numbers of people with underlying chronic conditions linked to severe COVID-19 disease.  Counts of people rather than percentages of the population were mapped because it is the number of people, not the percent, that can strain the health care system.  We also mapped the number of hospital beds – note that at any given time in the U.S. about 66% of beds are occupied by patients. 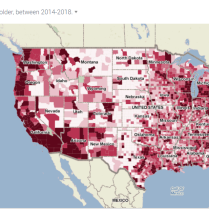 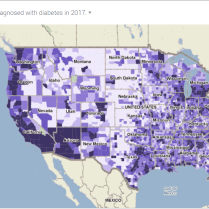 Measuring Neighborhood Walkability across Communities in the U.S. Over the Past Three Decades

Posted on September 18, 2019 by Built Environment and Health

We retrospectively measured neighborhood walkability for 2010 for 1 km circles centered on each Census block in NYC (N=38,526) using the BEH-NWI and using our prior NWI.  The correlation between walkability scores calculated from our BEH-NWI and our prior NWI across NYC is 86%, and BEH-NWI scores across NYC are also highly correlated with circa 2010 WalkScore data.

We used the BEH-NWI with two studies that previously collected physical activity, health and residential address data, the NYU Women’s Health Study and the NYC Department of Health and Mental Hygiene’s 2011 Physical Activity and Transit (PAT) Survey.  We calculated BEH-NWI scores for the residential neighborhoods of participants in the NYU Women’s Health Study when they first enrolled into the study circa 1990.  Higher BEH-NWI scores were significantly associated with greater self-reported walking per week and lower body mass index among study participants.  PAT Survey participant’s wore accelerometers for a week to objectively measure their physical activity and we found that higher BEH-NWI scores were significantly associated higher levels of physical activity.  BEH-NWI scores and WalkScore data were equivalently predictive of total physical activity among PAT Survey participants, but the BEH-NWI has the advantage that it can be retrospectively calculated across the U.S. back to 1990.

Differences in BMI by Quartile of Residential Neighborhood Walkability among NYU Women’s Health Study participants circa 1990.

The BEH-NWI can be a valuable new resource for research on how urban form and built environments affect physical activity, obesity, and health. The BEH-NWI is grounded conceptually in urban planning/design theory and uses data that are available nationwide and historically as far back as 1990. This measure will allow researchers to leverage existing longitudinal human health datasets for new insights into the role of neighborhood features in shaping health.